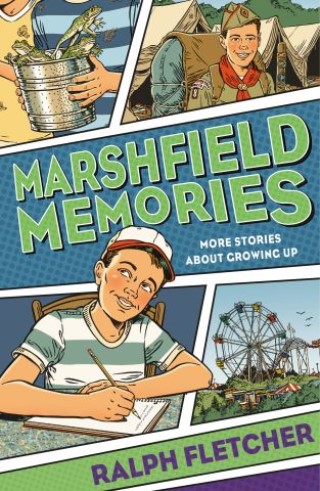 A heartfelt middle grade companion to Marshfield Dreams that captures the boyhood years of twelve-year-old Ralph Fletcher in relatable episodes of everyday disappointments and triumphs.

As the oldest of nine kids, Ralph was often cast as another parent to his siblings rather than as an older brother; teetering between these two conflicting roles, Ralph longed to be home alone on a sick day, but hated the emptiness of feeling left behind. He loved to play sports with his neighborhood friends but resented the skillful victories of his younger brother. Thrust into the expectations of impending adolescence, Ralph was curious about girls, but embarrassed to take part in the school square dance. This satisfying memoir offers a snapshot of those pivotal moments between grade school and high school, all while tracing the roots of Ralph Fletcher’s acclaimed storytelling.

Ralph Fletcher: Ralph Fletcher is the author of a wide range of books for young readers from picture books through novels, including Marshfield Memories, Marshfield Dreams, Guy-Write, and The Sandman. He also teaches workshops on poetry and writing. Mr. Fletcher lives with his family in Lee, New Hampshire.