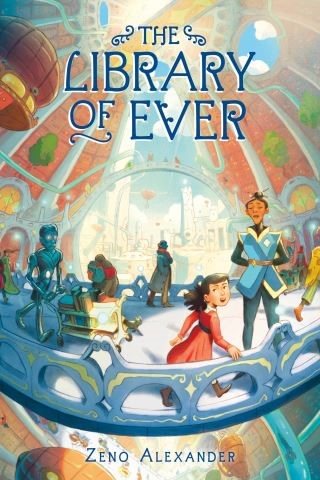 The Library of Ever

Named a best book of the year by Kirkus Reviews, The Library of Ever is an instant classic for middle grade readers and booklovers everywhere—an adventure across time and space, as a young girl becomes a warrior for the forces of knowledge.

With her parents off traveling the globe, Lenora is bored, bored, bored—until she discovers a secret doorway into the ultimate library. Mazelike and reality-bending, the library contains all the universe’s wisdom. Every book ever written, and every fact ever known, can be found within its walls. And Lenora becomes its newly appointed Fourth Assistant Apprentice Librarian.

She rockets to the stars, travels to a future filled with robots, and faces down a dark nothingness that wants to destroy all knowledge. To save the library, Lenora will have to test her limits and uncover secrets hidden among its shelves.

“Zeno Alexander's The Library of Ever reads like someone mixed Neil Gaiman with Chris Grabenstein, then threw in an extra dash of charm. Reading it is like getting lost in an entire library full of books, and never wanting to leave!”
—James Riley, New York Times bestselling author of the Story Thieves series

“Full of whimsy and pluck, The Library of Ever is a total delight!”
—Wendy Mass, New York Times bestselling author

Zeno Alexander: After emerging from the shadows of the past, his history yet to be fully explained, Zeno Alexander spent years exploring the world's libraries before settling down in his lavish underground bunker, where he regularly hosts exquisite dinner parties and tends to his collection of extinct plants. His friendship with the famous librarian, Lenora, has turned into a series of biographical works devoted to chronicling her adventures.